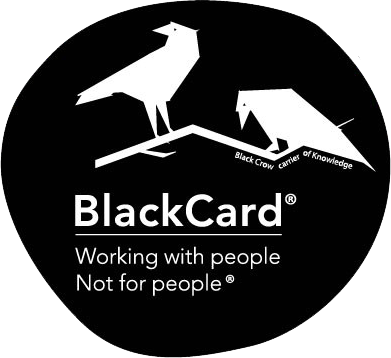 For a number of years, I had been working in education, training, and recruitment across community.private and the government sectors. I worked in many organizations where I was the only Aboriginal person in my team and many times felt frustrated with how my managers and colleagues engaged with not only myself but also the lack of understanding they had when it came to our clients who were usually all indigenous. I reached a stage in my life when I wanted to become independent, and knew that I had built relationships with different organizations across many sectors over the years. I visited my Aunt Lilla one afternoon for advice about quitting my job and expressed what I wanted to do, and she said she had something we could go into business together with-BlackCard.

I immediately agreed, not really thinking about the fact I had two small children, I was working full time and studying an advanced diploma at night school. Within a month I had quit my job, registered the business and held our first workshop

I was 29 years old and we held our first workshop at the Mercure Hotel in Brisbane and I remember only about five people from the public came and nine others who were all family members. After 18 months of trading, we were in a little trouble. We hadn’t been managing our books properly and were operating off Aunty Lilla’s credit card

Looking at our financial situation, my Dad, who was my biggest supporter at the time, said, unfortunately, the best thing for us was to wind the business up. I left that meeting crying like I’ve never cried before. All of my blood, sweat, and tears I had invested in the business felt like it had all been for nothing

However, a phone call later that night from Aunty Lilla changed everything

She said, “Don’t listen to your father, we started with nothing we’ve got nothing to lose, we’ve got something special that no one else has, let’s prove them wrong!”

It was about a month after that when the Commonwealth Bank knocked on our door. We had put in a proposal to develop a cultural capability framework based on Aboriginal Terms of Reference, which would underpin their Elevate Reconciliation Action Plan. Thankfully, we were successful with the proposal and have been rolling out the framework across their business for the past four years.

And we’re doing even more work with them now, training everyone from talent acquisition teams, indigenous call center staff and state and regional managers.

The biggest impact we are having on organizations is linked to the very first part of our workshop where we get people to answer questions about who they are not just what they do. Afterwards, people realize, why aren’t we going to every business meeting and spending five minutes building relationships. That’s one of the biggest ways to demonstrate cultural capabilities

There were different attitudes directed at Aboriginal peoples, and it was mostly negative

I was able to take advantage of the Whitlam Government’s Aboriginal Studies Grants to gain a higher education and eventually became a tutor, then lecturer, in the Social Work Department at the University of Queensland

I then worked as a professional artist, before becoming involved in presenting Cultural Awareness Workshops with a very close colleague, Mary Graham (a Kombumerri woman from the Gold Coast) and writing about race relations

Five years later, after people had been talking about a Black Card on-and-off but no-one working to produce one, my niece Mundanara came to me saying she wanted to leave her job and work for herself.

White people’s attitude was very wearing -Aboriginal people are constantly confronted with racist attitudes at work so with the workshop materials Mary Graham and I had developed, we sat down and discussed the possibility of producing a “black card” for non-Aboriginal people to gain a greater awareness and understanding of themselves and Aboriginal people’s culture, history and knowledge

That was the beginning of Black Card, to educate people on Aboriginal Terms of Reference which are based on all the great knowledge our peoples have developed and accumulated in this great island home over a long period of time

People are wanting to learn about the land they are living on and Black Card is providing a lot of those answers. So it’s a good thing